What makes a good hypothesis? 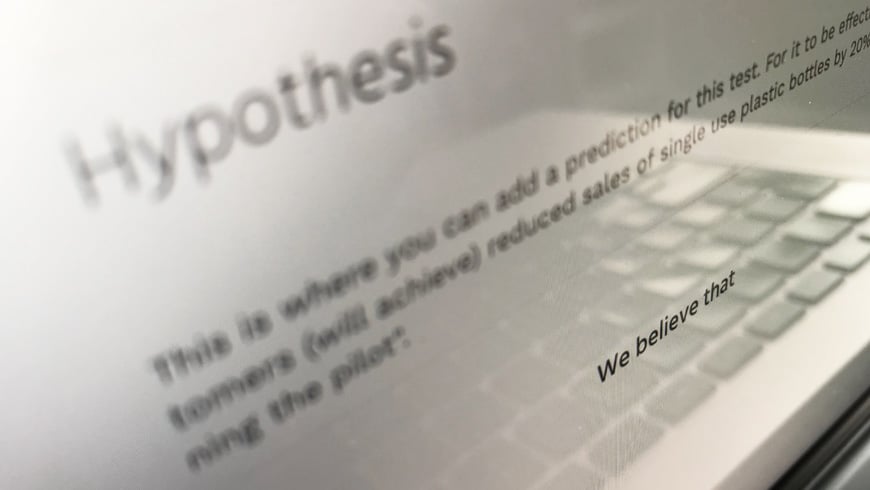 A carefully chosen and well-written hypothesis makes it easy to design an experiment to test and learn from. So here are six steps to follow when crafting your prediction.

A hypothesis is essentially a statement of belief that expresses why you think your innovation, or change to your product or service, will create value. The hypothesis is what you test when you run experiments, to try and turn that belief into more certain knowledge.

Every experiment you run should be designed to test a particular hypothesis, and its usefulness will depend in part on how well you have articulated that hypothesis.

So how do you create and articulate a good hypothesis?

You are unlikely to be able to test your entire innovation with one hypothesis. Even in the early stages of testing the fundamental idea behind your product or service, there are a few different assumptions that need exploring. In his book 'The Lean Startup', Eric Ries identifies two in particular: the value hypothesis and the growth hypothesis.

The value hypothesis is designed to test whether your product or service provides potential customers with enough value once they are using it (and therefore, whether they would be willing to pay for it). Creating a Concierge MVP, for example, allows you to test the hypothesis that customers are willing to pay for a particular service before you build the automated version.

The growth hypothesis tests how new customers will find and start using your new product or service. If you have assumed that you can grow your customer base through word-of-mouth referrals, for example, testing how many users of your MVP go on to tell their friends about it will give you an idea of whether that is likely to work.

As you continue developing your idea, you might want to test smaller, less fundamental assumptions. For example, if you are building a digital product, you might want to test whether a 'Buy Now' button works better at the top or the bottom of a particular page. Each of these tests rests on a single hypothesis, and articulating that hypothesis clearly can help you design better experiments.

2. Start with what you know

"Many people are unable to clearly articulate their current understanding and assumptions about their business and their customer. If you are unable to clearly articulate these and you are trying to run experiments, it's a red flag. It's probably better to start with developing a better understanding of your customer than running haphazard experiments."
James Birchler

3. Test one thing at a time

Don't be tempted to create a hypothesis that covers more than one aspect of your innovation. While it may feel like it saves time, in actual fact you'll be unable to distinguish which aspect has caused the results of your experiment. For example, changing two aspects of a sign-up page and then testing won't tell you which of those aspects caused any resulting change in the number of sign-ups.

How will you know if your hypothesis is correct? Before you can experiment, you need to set a measure that is right for your innovation project. There are two aspects to making your hypothesis measurable: choosing the right metric and setting a clear objective.

The metric you choose should be as closely tied to what you are testing as possible: for example, if you are testing the value hypothesis, asking potential customers if they would pay for a particular product or service is not as reliable as building a Concierge MVP and seeing if they actually do. Think hard about what metric will give you the most useful information.

Imagine that you've decided that you need 20 customers to use your Concierge MVP and pay for the service to prove your hypothesis. You get your 20 customers, but over the course of two months. Is 10 customers a month enough to prove your hypothesis? What about ten customers a year? Each of these represents a different level of interest and will be crucial in forecasting potential revenues for your product or service. So be clear about your timeframe – how long will you run the experiment in order to generate useful results, and what do you expect to happen in that timeframe?

6. Express it clearly and simply – and don't go overboard

There are many different ways of structuring your hypotheses, and you need to find the one that works for you and your organization. We've recommended starting your hypothesis with the phrase 'We believe...' in order to articulate your assumptions clearly, and one approach is to follow this up with 'We will test this by...' and 'We are right if...' These simple phrases encourage you to include the basic elements of a good hypothesis without overcomplicating matters – for example:

'We believe that customers will be willing to buy books online. We will test this by setting up a Concierge MVP where customers can order books. When customers order, we will then go to the bookshop, buy the books, and send them to the customer. We are right if x customers per month over six months order a book from us.'

Sign up for a free one-month trial. No credit card required.